A downloadable game for Windows, macOS, and Linux

Knock 'em Out is a combination platform fighter (think Super Smash Bros) and beat-em-up. Instead of damaging enemies, hitting them knocks them back, and the more you hit them, the farther they'll fly! You're tasked with punching, kicking, juggling, and hurling a variety of nasty clowns off of a wealth of unique stages. The player character has over 20 unique moves to choose from, from basic punches and kicks to jets of fire, grenades, and even slowing down time!

Knock 'em Out is an executable .JAR file. In order to run it, you must have Java installed on your computer. From there, it should be as simple as double clicking on the program; if that doesn't work, please look up how to run a .JAR executable on your operating system.

If you have any questions, comments, or feedback about Knock 'em Out, please email me at byninegiga [at] gmail [dot] com. If you'd like to see more similar content, follow me at bynineb.tumblr.com or here at https://itch.io/profile/bynine. Thanks and enjoy!

NOTE: Knock 'em Out contains audio from various other sources. The rest of the game's content is entirely custom.

I would say that this is your best game yet! Your effort and passion really shine in this one, especially with the huge arsenal of moves the main character has and all of the little aesthetic details in each stage. I'm also quite impressed with the multitude of stages and gameplay modes! I could see myself getting hours of playtime out of this.

I did notice a few minor issues that I want to comment on:

thank you for the thorough response and i'm glad you enjoyed! the tutorial was supposed to be where you learned the controls, but admittedly a simple list would probably compliment it well. i was unsure of how to handle walking with the keyboard to be honest. and as for the bugs, i've noticed the problems with the purple guy but haven't figured out how to rectify them. the crashes are strange though! i'll look into that. thanks again! 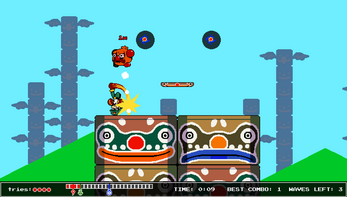 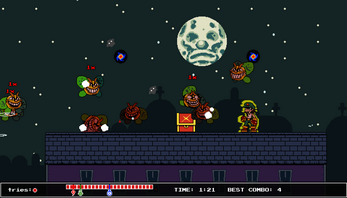 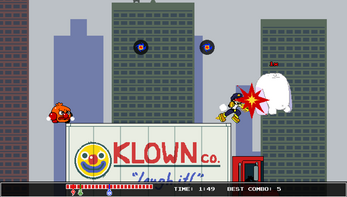 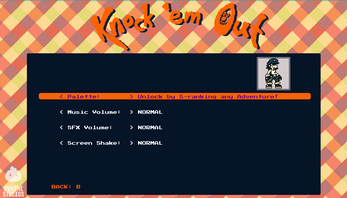